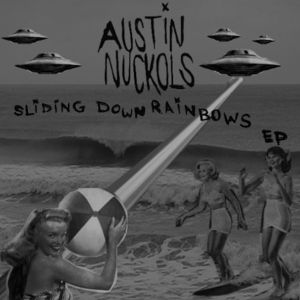 On the cover of Austin Nuckols’ latest EP, “Sliding Down Rainbows,” three girls in old-timey swimsuits are cut out, standing in front of a cresting wave. One of the girls is separated from the other two, holding a beach ball and looking at you. Five spaceships are floating over the scene, one of which appears to be beaming something from the air down to the woman holding the ball.

It makes sense. Despite the low-fi production quality, tinted vocals and an abundance of sloppy performances, the one thing this six-song set does well is imply its affinity for surf rock best suited for settings that have unlimited access to beach babes and aliens. The formula isn’t hard — take that slinky guitar line, throw some simple drums under it, add some cheesy special effects and then repeat ad nauseam for at least three minutes. Shoot, even the dude himself realized as much when he wrote on the EP’s Bandcamp page, “This record was recorded with little effort and a lot of energy.”

And be it for better or for worse (it’s not the former), that’s what you get here: an uneven, amateur-sounding quick set that features songs almost impossible to distinguish.

Take the first two songs as proof. Leading things off, the spotty title track is a tough listen with its begging-for-a-tempo-drums doing nothing to help the distorted vocals be anything less than soulless and pretentious. Not even an endearing horn part that plays it out could help save the thing from sinking. “Adventure,” meanwhile, takes the same ideals and skids because of its hollow Southern culture.

Slowing things down doesn’t even really help save the set from a special kind of sunburn, either. “Ohh Girl,” while tender and admirable, suffers from flippant playing and lazy writing. Sure, this marks the only time the basement production collides well with the surf-rock theme, adding a texture reminiscent of 1960s rhythm and blues to the ballad-like approach, but by the time the 5 1/2 minutes are up, the whole thing feels more Spinal Tap than Smokey Robinson.

“Outside,” the most adventurous of the bunch, takes a funk groove and adds that faint experimental psychobilly touch needed to pull off this kind of stuff reasonably well. The result at least kind of works. Sure, it’s no Los Straitjackets, and nor does it utilize the Southern Gothic tag as much as it could, but if nothing else, it feels like the set’s most complete moment, all sci-fi sound effects be damned.

It’s hardly enough to make up for the haphazard “Silver Lips” or the oddly structured “Spinnin Round,” which closes everything out. Though energetic, the former suffers from an eerie desire to want to shout the word “Tequila” whenever its breaks creep through. “Round” then takes a shot at what rock sounds like when it runs north of the Mason-Dixon Line. The end product isn’t much more than a mesh of sounds capped by sound bites of high-pitched talking and maniacal laughter. A harmonica eventually shows up for no real good reason, but by the time it gets to the door, you’ve already grabbed your coat, inching further toward your car.

Yet even though the road on which Austin Nuckols travels is more than likely paved with good intentions, “Sliding Down Rainbows” is hardly solid enough to be considered a dead end. Unoriginal. Incompetent. Occasionally boring. And just an all-around tough EP to fully digest, the six songs here are devoid of promise and thought, devoid almost entirely of worthwhile moments, however brief they may be.

Or, in other words, it sounds as though it was “recorded with little effort and a lot of energy,” as the record’s creator once said. Trade effort for energy, dude, and then we’ll talk.