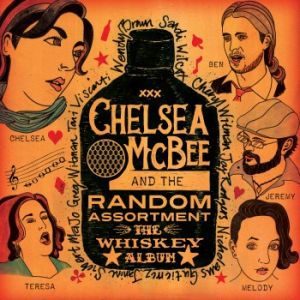 Chelsea McBee might not be reinventing the wheel, but darn-it if she hasn’t figured out how to craft the most durable tire in the garage. Her latest ode to “The Traditional Drink of Colonial America,” “The Whiskey Album,” is a coming out party of sorts if only for how complete her ideas finally feel after a string of up-and-down releases that always promised she could do something like this in the first place. One listen to any of these 11 tracks and everything immediately becomes clear: The West Virginia native never allows a promise to go unkept.

Everything is different. Everything is better. Where before, she might not mind taking a track or two off, there isn’t a single throwaway in this bunch. Where before, either money or time might get in the way of bulking up the production, you could go blind staring at the polish that shines through each performance. Her Random Assortment is skin-tight and her familial harmonies flutter like feathers from a broken pillow. “The Whiskey Album” isn’t just the singer’s strongest collection yet; it’s also one of the Frederick area’s most essential releases of at least the past three years.

It begins with one of four McBee originals, “Pour Yourself a Glass,” and that first taste goes down as smooth as the purest water. Easing in with some stray banjo strums, you couldn’t possibly ask for a more welcoming lead-off track, its best part coming as the bass groove sits back with precision on each chorus, adding a texture as fun as it is imperative, all the while bopping along with a deliciously upbeat feel. By the time a mandolin rips through a rock-star solo near the bridge, you’re still not over how well her twangy voice sits above the wall of sound supporting her.

Actually, it’s that voice that proves key in the success of the set. Standing taller than it ever has before, McBee has earned herself a healthy helping of confidence through the years, and it shows in the most subliminally effective ways. “Gone-a-Rye” is rich with simplicity and innocence, her vocal approach offering up a cute, traditional way of attacking the bluegrass genre. Throw in a slew of three-part harmonies and you begin to double-check if the record says “The Random Assortment” or “The Dixie Chicks.”

Conversely, “Try Again” is hauntingly pretty and unforgettably resilient. Slowed down and structured around one of the many poignantly plaintive metaphors that appear here, it highlights the singer’s ability to evoke emotion by offering very little of her own. If there’s a sonic equivalent of staring into a single camera with a look frozen over with ice, it would be the way McBee presents herself throughout these three minutes and 15 seconds. It’s a whole new shade of dark.

Meanwhile, “The Devil Himself,” the final original, brings the songwriter’s secret weapon to the forefront: an irresistible hook. Underneath all the great musical performances and clever lyric writing is a serious sweet tooth yearning for some heavy doses of sugar. Impressively, each time, the singer delivers with a tiny section nearly impossible to shake. Be it the repetitive nature of “Devil” or the undeniable fun of “Rye,” these things will stick in your head for weeks and there’s not a thing you can do about it.

None of this is to suggest that the traditional tunes aren’t worth your time, either. Winding everything down with “Ol’ Sledge” and “The Parting Glass,” the former gives a platform for her band to take the lead one more time, reminding listeners how essential they are to this recipe while the latter is picturesque in its tonal beauty. It helps that its pedigree as an old Irish folk song gives McBee and her group of vocalists the ability to transform it into one of the most honest a capella gospel-infused covers West Virginia has heard in a long, long time. The whole thing is an exercise in the dichotomy between sadness and optimism. It’s the perfect way to end a perfect record: sad because it’s over; optimistic because of what it is.

And what it is, is an improbable leap forward for Chelsea McBee and the Random Assortment. Doused with layers that begin but don’t end with a mere alcoholic beverage and propped up by performances as solid and capable as anything anyone around has done, “The Whiskey Album” is like a finely aged bottle that enthusiasts keep on the top shelf and open only when special occasions occur.

The only real difference? This set promises a hangover isn’t anywhere near the horizon.