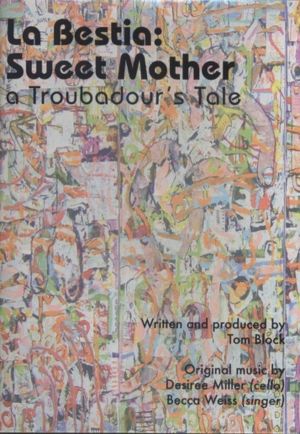 Well, it’s impressive. And ambitious. There’s no denying that. “La Bestia: Sweet Mother, A Troubadour’s Tale,” what Silver Spring visual artist, playwright and author Tom Block describes as a “multi-media exploration of the mother as both creator and destroyer,” is a single track, 40-minute musical performance that takes you on a wild, if not somewhat eerie ride through Block’s creationism concoction. It ends with an ambiguous “Why,” and you can’t help but wonder how figurative and literal that utterance truly wants to be.

It’s not that there isn’t anything to commend in these movements; rather, one must wonder how well such a presentation works without the visuals that beg to accompany it. Maybe some dancing? Perhaps a bit of acting? Instead, this stripped-down, neo-classical, audio-only performance leaves any listener who doesn’t have an imagination wondering what could have been. As for those who have no problem visualizing the story at hand, however … well, get ready. Forty minutes rarely feels this quick or this cluttered.

None of that is meant as a judgment value, of course. Becca Weiss has a richly perky voice that jumps from spoken-word to harmony-laden on a dime. Paired with cellist Desiree Miller, who fills out an empty background with a palate of colors that would make Georgia O’Keeffe blush, the attack works fantastically, from a technical standpoint at least. The two have an earned chemistry that makes the production whole.

Beginning with lush strokes of gloom that loom like a family of storm clouds over a hot summer evening, Weiss eases her way into the performance with strewn enunciations that showcase the depth of her range. It sets the stage for an intriguing wash of moods that drowns any preconception of inability. The woman can sing, and she can sing well.

Yet by the time that gives way to her storytelling abilities, you almost wish she wouldn’t stop crooning. Nothing against her talent as a narrator, but that textured pitch of hers could have been used in a more ingenuous manner, had she chosen to keep those intonations more flexible. Such a decision makes the end result feel as though it’s lacking at times, a mere fraction of the potential that appears often but not enough.

Those missed opportunities are forgiven, however, when Miller sprinkles in her brilliantly tasteful sound effects. Subliminal in nature, yet imperative in execution, her tiny bleeps and bops — all produced via her sturdy cello, mind you — should bring an easy smile to any listener. They don’t just break up the monotony of the production; they add a layer of intricacy that’s mandatory to appreciate.

Her expertise also helps make the best part of the performance, at about the 23-minute mark, work with a unique sense of versatility. It’s here where the orchestration dips into a darker place and the structure takes a right turn down an alley filled with jazz cats. On a whim, the duo trade in their dramatic flare for some smokey-cool berets and even a modicum of groove.

“Baby, his voice is a wide grin/ Against the broken moon, his chin,” Weiss asserts atop a cello-turned-bass approach that would make both Mingus and Clarke proud. The move is a wickedly fun departure from the classical influences that surround it, a welcome change of pace that all but paints a portrait for the contradicting scenery this performance often embodies. It’s like stepping out of an opera and into the Blue Note.

It also proves that the level of difficulty behind “La Bestia: Sweet Mother, A Troubadour’s Tale” is both exceptional and uncommon. Miller and Weiss wrote and performed the music, and while it was recorded in New York’s East Village, you almost want to believe it was created somewhere within the depths of your own headphones — the whole thing simply feels that personal. An amalgam of talent combines with otherworldly goals here, and it all adds up to one big Wow.

So, actually, check that first thought: Impressive and ambitious don’t even begin to scratch the surface.

Colin McGuire is a writer and page designer at the News-Post, as well the music reviews editor at PopMatters.com. His blog, TV Without A TV, can be found at blog.fredericknewspost.com. Find all reviews plus local music podcasts, videos and upcoming shows at FrederickPlaylist.com. Email 72Hours@newspost.com if you’d like your album considered for review.

Photo Of The Day: Can You Canoe?