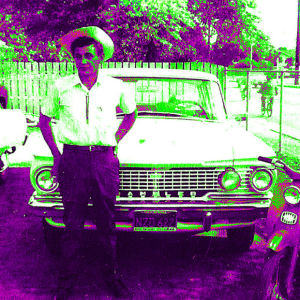 These are tiny, tiny songs. If this were a candy store, Lucas & the Lovelys’ most recent self-titled set would be filled with the most infinitesimally fluorescent childlike pieces wedged within the corners of Nerds boxes that fill the shelves everywhere. Each bite is miniature. Each taste is sweet.

And each listen is, of course, lovely.

Clocking in at 12 tracks with only one that goes past the four-and-a-half minute mark, you can’t help but smile whenever that lo-fi production kicks in and yet another irresistible hook takes center stage. It’s like Lou Reed allowed Kimya Dawson to sit in on a few sessions for “White Light/White Heat,” and both were looking to make a Top 40 hit. Or the Violent Femmes married Belle & Sebastian and the former was looking to get super feminine. Or Kim Gordon called up Guided By Voices 30 years ago and told Sonic Youth to give Carrie Brownstein a call. Or … well, you get it.

“Lucas & the Lovelys” is delightful even when it’s meant to hurt. “I tried to call you on the phone/ I even came to your house,” co-singer Tara Jenkins offers on the straight-forward rocker “Hey,” before eventually giving in to an uninterested lover who “Said get up and get out.” You want to feel bad for her, but underneath the bluesy guitar and unabashedly indie drum pattern, you can’t stop tapping your toe. The formula makes you sigh a pleasant cheer when she eventually concludes, “Hey, I want to hold out my hand/ But hey, it don’t matter, man,” during a shining bridge with a killer backing vocal line.

Such is why “The Lovelys” part of the band name is the most imperative element of the operation. Drummer Katherine Seifarth is unapologetic in her playing that recalls the most aggressive moments of David Lovering’s early career while Kelly Brown’s bass follows her partner’s lazy precision with essential ease. Check the second half of “Stockholder” and “Love on the Water” to hear what it’s like to sway successfully, even if that sway happens to fade in and out of shakiness.

And then there’s Lucas himself, the male leader of a group driven by estrogen, who doesn’t take the lead nearly as much as the band’s namesake might suggest. His voice is sparse and deep with a twang that appears only casually. It works as the yang to his bandmates’ yin in ways best seen when they’re subliminal. “Georgia Pines,” as an example, utilizes his croon better than anywhere else in its latter half as the innocent “I’m still gettin’ ready” refrain benefits profoundly from the matching woman’s voice behind him. It’s the moment the formula’s dichotomy reaches its maximum potential.

Yet even so, nothing can touch “Reno,” the collection’s most endearing effort. There isn’t much to it, just a series of acoustic guitar ring-outs in time with some pedestrian cymbal crashes for about half of it. The band kicks in at a little more than a minute, but the damage is done: There’s no way that hook leaves any listener’s consciousness after even a discretionary listen. “If you want/ We can go to Reno/ We can make/ Love in a casino,” Jenkins begins and if there’s a pulse, the heart accompanying it melts accordingly.

Alone, the track embodies everything that allows Lucas & the Lovelys to succeed in the first place: Cute-as-a-button female vocals, a no-nonsense approach to craftsmanship and a very real naivete that becomes more and more palpable with each press of the Play button. They won’t sell out stadiums with any of this, but that’s not the point; these things were written to satisfy the intimate crowds that sell out campfires.

And for that, these gals (and, well, one guy) should be lauded. Overextending a set of abilities can always get in the way of one’s most blatant talents. But with Lucas & the Lovelys, the talent is both specific and real, and with this album, it’s presented with both confidence and dexterity. None of these were designed to be the jumbo-sized lollipops that take up half the shop. No matter. Because as those tiny boxes of Nerds oftentimes prove, sometimes the sum of their parts is far better than a stray shot of sweetness every now and then.

Colin McGuire is a writer and page designer at the News-Post, as well the music reviews editor at PopMatters.com. His blog, TV Without A TV, can be found at blog.fredericknewspost.com. Find all reviews plus local music podcasts, videos and upcoming shows at FrederickPlaylist.com. Email 72Hours@newspost.com if you’d like your album considered for review.

Photo Of The Day: Rozwell Kid